Four accounts will welcome 2020 throughout the day

The industry is poised for disruption 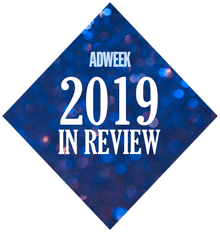 Disney and Amazon are getting stronger, offering loads of quality content that only make it harder for Netflix to keep its subscribers.

Disney is offering a bundle package of its streaming services: Disney , Hulu and ESPN for $12.99, which will include the standard ad-supported tier of Hulu. Amazon, already the third largest advertising company in America with $18 billion in revenue, has a major advantage with Prime, a service now being used by more than 100 million people.

There is a good chance Disney and Amazon are already in most of our homes in some capacity, and they will continue to use advertising as a strong bridge to further penetrate into our lives.

As successful as Netflix is, they’re facing a whole new type of competition on all fronts, from quality of original content to distribution to price. While Netflix said they won’t go the advertising route, I think it is their destiny. And with their reach, data, technology capabilities and opportunity to reach users and TV advertising being such a successful vehicle for advertisers, I predict they will become one of the largest advertising companies in the world—and they will never turn back.

Apple will have its first failure with iTunes on other TVs

Apple’s success rests in the hands of the well-respected and visionary Eddy Cue’s ability to make Apple a services company across music, payments, health and content. But to succeed in a services strategy, Apple must become ubiquitous and offer its content/services everywhere, which is something the company has not done successfully to date.

For example, can Apple truly succeed partnering with Samsung, delivering content through iTunes? I remind you that Spotify’s app on Apple Watch is still just a remote to your phone, but not a standalone app like it is on any other smartwatch. Apple’s biggest conflict is bringing the magic we all love to use in the Apple kingdom outside of their walls by partnering with others.

So, can Apple partner? This will be the year we’ll need to either see Apple evolve into a whole new company culturally under Eddy’s leadership or fail in this new world of services we’re all heading toward.

From Roku to Samsung, physical devices will help save journalism

In 2019, we saw the origin of news as a service, where began expanding into the news business, aggregating news and surfacing articles to their users to drive engagement. Next year, this trend will continue to breathe new life into platforms like Fire TV, Roku and even legacy providers like TiVo.

Amazon debuted a news aggregator app that rolled out to its 37 million active users, Roku added more standalone apps from news organizations to its devices and Samsung alone sells about 700 million devices a year, having created a massive opportunity to surface news that matters to consumers and bring people back to the open web. More access to news is a great service for readers. Platforms and devices that offer quality journalism and video content in a brand safe manner or in ways that actually drive traffic to publishers’ sites or OTT apps by putting more control at the hands of the publisher will rise to the top.

When you think of billions of devices sold a year (smartphones, TVs), the opportunity for the physical world to collectively save journalism is massive, and we’ll see a lot more of that in 2020.

The rapid evolution of the content space in 2020, which is demanding fast growth and fighting hard for users’ attention (and dollars), will force companies to break out of their comfort zone and evolve past their traditional approaches to this market. That includes unconventional partnerships, new types of business models and perhaps even a newly evolved culture that is better prepared for the future. Things are about to move even faster, which is an exciting time for us all in the content space.

They foresee a year of voice shopping

Media Execs Look Ahead to the Biggest Stories of 2020

Why We Are Still Talking About Email in 2020

Remember when the excitement over an email notification prompted a movie with Tom Hanks and Megan Ryan? Now, email notifications get routinely ignored and funneled into spam folders. And yet, we just can’t quit email. Continue reading →

The Washington Post Takes to TikTok to Drive New Subscribers 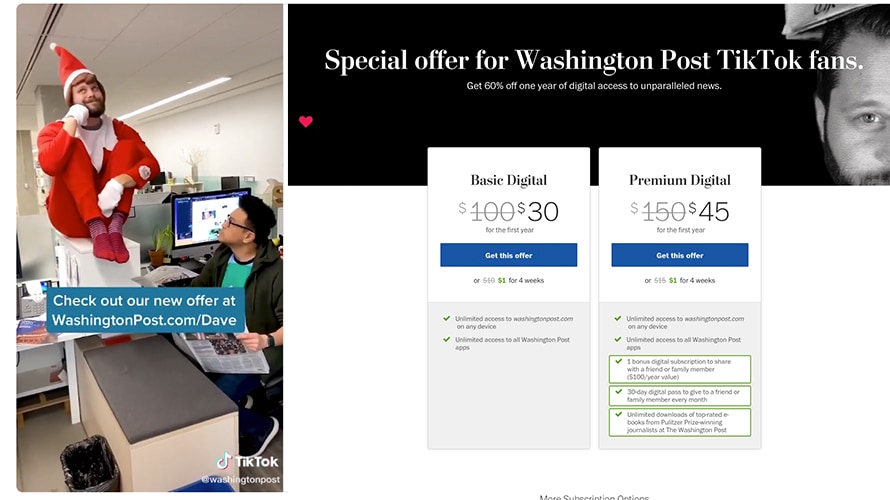 over the summer, with some reaching 1.8 million views within 24 hours. While King said the latest TikTok post, in particular, isn’t expected to “get large numbers of direct response subscribers,” it’s a way to build the brand for potentially younger readers.

Publishers have created brand marketing campaigns as more turn to their readers to pay for their journalism, introducing membership models or paywalls as they continue to compete for ad dollars. This includes The Wall Street Journal, which released a widespread TV and OOH campaign to “read yourself better”; The New York Times, which showed how its reporting is done with its “The Truth Is Worth It” campaign; and The Atlantic, which created a mural to tout its new magazine design and focus. The Washington Post also put an ad in the Super Bowl last year to honor journalists who had died in their line of work.

While some Washington Post journalists appeared in the Super Bowl ad, King said that there might be additional future opportunities for the publisher to use journalists, particularly from lifestyle and commentary sections of the newspaper to tout subscription drives as they also build their brands and become their own forward-facing entities.

King’s team will keep track of the number of people and where they come from that sign up for subscriptions from the URL Jorgenson promoted in addition to other staffers who also shared URLs for the subscriptions. But that “is not something we’re communicating to the newsroom,” she said, later adding, “or in any way creates a metric for their performance.”

Messages encourage users to shop and check out within the app

Black Friday), stated “New to Instagram: shop outdoor voices, victoriabeckhambeauty, anastasiabeverelyhills and spearmint baby.” Once a user clicks on a product, a shopping feed opens up in the app, where users can select the product, sizing and more, and then check out with Instagram’s native Checkout feature. Another email sent on Dec. 10 highlights a set of brands available on Checkout including Victoria Beckham Beauty, Je11 (the brand from New England Patriots wide receiver Julian Edelman) and Savannah Bee Company.

Instagram first sent these emails a few months ago, when new brands like Outdoor Voices joined the Instagram Checkout beta group. Outdoor Voices, a digitally native athleticwear company, was not part of the original beta group, but was also featured in both sets of emails.

“At Outdoor Voices, we only partner with brands who are aligned with our mission to Get The World Moving, and Instagram is no exception,” said an Outdoor Voices spokesperson. “They’ve been fantastic to work with, and we’re excited to continue partnering with them on future projects.”

Kevin Simonson, CEO of Metric Digital, a performance marketing agency, said he’s working on testing out the email tool and seeing if the brand gains any lift.

“After working with Facebook for years, they’re doing what they almost always do, which is testing a new advertising product with select disruptor brands, like a couple of our clients, in what’s free ad inventory for them,” Simonson said. “If history repeats itself, they will continue to send free emails until the new product, in this case curated emails you can shop, is so compelling to users that they can charge for ad placements in the email, unlocking new ad inventory and the advertising revenue that comes with it.”

Over the past year (if not decade), Instagram has influenced the way consumers shop and discover new products. Whether it’s influencers promoting an item or the rise of DTC brands on Instagram, the app has changed the products we want for ourselves.

As the company continues to ramp up its Checkout feature, it gives companies a chance to be discovered—or to reward impulse purchases from the brands consumers already know and love.

And while Instagram has yet to reveal specifics about how much consumers are spending on Instagram, it’s clear the app is an initial testing ground for lower-priced products like makeup, but part of a bigger plan to acquire customers and turn them into repeat ones. the 25 Best Ads of 2019 and honored BETC as International Agency of the Year.) You can watch the spot below, followed by the credits for the new print work from Yellow Shoes.

How These Brands Used to Design to Create Brand Relevance

The first in a 3-part series